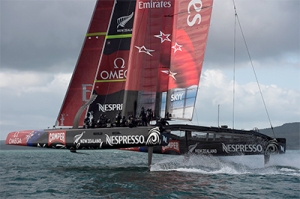 And Team New Zealand has gained a few points. By racing by themselves. Or against Luna Rosa who appear to be WAY behind technologically speaking.

I’ve been thinking about this a bit. I’ve come to the conclusion that I think the buildup and eventual competition for the Americas Cup is totally worth it.

Yes, there is a large amount of bullshit around rules, legal challenges, hissy fits and other childish behaviour. But at the end of the day, we get to see some pretty amazing sailing, on some pretty amazing boats. Boats that the likes of which have never been seen. Cutting edge nautical technology, sailed by the best sailors in the world.

Yes, the NZ taxpayer has contributed some $36million towards this. I’m ok with it. If Team New Zealand bring the Americas Cup back to NZ, the ROI is huge. If they don’t? There’s still offshore branding going on.