These last couple of weeks my kids, Master 16 and Miss very-nearly 13 have been on a bit of an overseas excursion with their mother.

It’s been a few months in planning – basically it’s around a trade show that my Ex needs to attend for work – so the opportunity to expand the life experience of my kids is fantastic.

However, where Miss very-nearly 13 has been excited and planning all the things (and yes, she will turn 13 whilst away), Master 16 has been incredibly anxious. For the three months prior to departure he was in denial. In fact he hadn’t packed up until a few hours before their flight out.

Their first destination was LA. Master 16’s anxiety was summed up in a few text messages to me:

This of course was of concern. I queried him as to what he was feeling:

I do need to note here that LA isn’t that bad. I have many friends who live there. I suspect he plays too many video games.

That one was hard to read.

I challenged him to focus on and to tell me about ‘three good things’ that he saw or experienced each day, and to his credit he has.

This simple task changed his perspective on LA and his travels. Phew.

He felt a lot more comfortable in London. To him, it’s more like New Zealand and he was able to find a ‘normal’ breakfast. (My God, he has routines).

All this time of course, his mother and sister have been enjoying, seeing, exploring, shopping and telling him that they’ll be using his baggage allowance for the trip home.

Paris has been interesting for him. He wasn’t prepared for a country where English is not the first language. 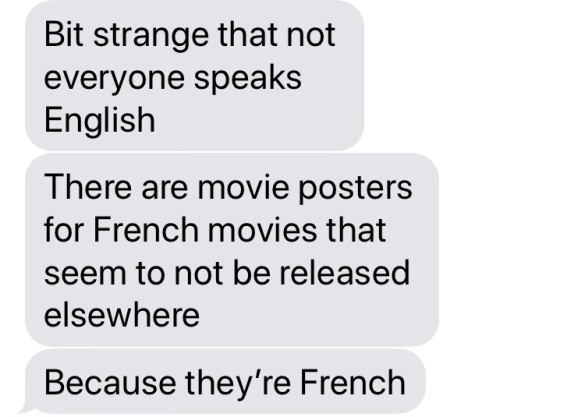 It’s been good to see that they’ve walked and explored. They did do the Eiffel Tower for example. However, an upbringing in NZ does heighten the hypochondria somewhat:

I asked him about his feelings. Being in a place with much history:

I think he’s getting used to this travel thing.

I asked his sister about how it’s going, what she’s seen, what she has enjoyed etc. etc.

Sigh. Describing the Louvre as ‘the giant art place’ didn’t give me much hope, but they managed to see the Mona Lisa (small painting, big crowd) as they ran through due to time constraints. She has enjoyed the Architecture of Paris though, so that’s a bonus. She is seeing the bigger picture.

The boy’s first observation was the Cologne Cathedral all lit up at night. Apparently my daughter was enthralled. He did make an observation about the locals:

They’ve managed to get some shopping and some eating done. By this stage he is feeling a lot better about things.

The man child clearly doesn’t yet have my adventurous streak activated. I’m sure it will come. I’m not too worried about the girl child at this point.

I do feel a bit disconnected though. Whilst it’s great they’re experiencing this, I know their experience of the world would be different with me alongside. Less anxiety more openness perhaps. I will add this to my list of things to explore with them.