This morning we settled in to watch the All Blacks play France. One of the family members brought their 3 year old daughter over to join in the fun.

Her being three, of course, meant there was always going to be an alternate commentary.

10 10 minutes in, she looked up at the screen, taking her eyes briefly from her Frozen coloring-in book and brand new pens: “Who are the silly boys”?

“Elsa has blue eyes and a gold crown”.

A few minutes later, on observing the players contesting for the ball on the ground: “What are they doing”?

This question required a carefully considered response from her Dad and me: “They’re having a cuddle. And a rest. When the ball comes out, they’ll get up and start running again”.

“What is that man doing”? (Seeing the referee). “That man is like a Teacher, with 30 children in his classroom. He tells them what to do.”

Before we could answer, we were transported back to Frozen. “Who do you like: Elsa, Anna, Kristof, Sven or Olaf?” (Hans apparently wasn’t an option).

Back to the sin bin (also known as the naughty step). “Is he allowed to play again yet? How much longer”? This is clearly weighing heavily on her mind.

One breath later: “Simon, you can colour in Anna”. (And we are back with Frozen).

The stream of consciousness is highly amusing.

Another try scored. “It’s amazing and astonishing to just drop the ball”. This was followed with an indepth explanation by Dad about how all the players had a single purpose, to place the white ball over the line. “It’s called a Try”. She didn’t care. Anna has dark blue eyes. Apparently there is no discussion to be entered into.

The full-time whistle blows. The teams shake hands and hug in victory and loss, reveling in the camaderie that only rugby players know: Miss 3: “They’re having cuddles for reals”.

They ghosts of the past have been well and truly exorcised. 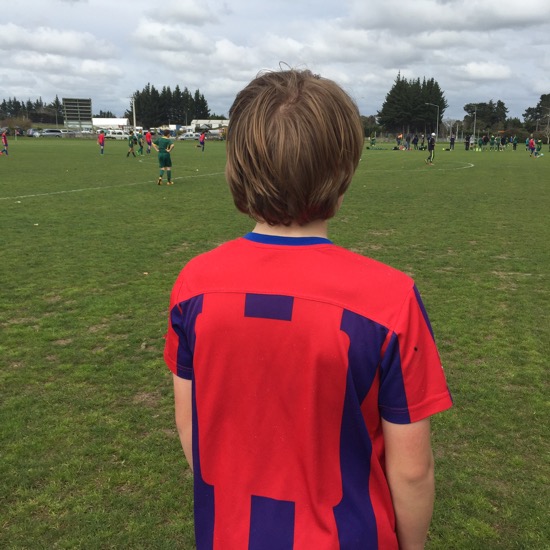 Being the parent of a child who loves soccer (football for the purists) is hard.

In fact, it can be quite traumatic.

As another season draws to a close, I feel reflective. My son’s team really isn’t very good.

It’s his seventh year of playing. The first few years were challenging as there weren’t any coaches available so well-meaning parents took the role. And the kids, including my son, didn’t really learn anything about the game. Over the seasons the better players were selected for better teams leaving the average. Other players left for other clubs or school teams, so cohesion and continuity hasn’t been possible.

Happily though, these boys are no longer chasing the ball as a bunch. Today, despite a heavy loss, saw them play as a team. It was a beautiful thing to watch.

This year another parent stood up to coach, and all credit to him as he is passionate. He’s given up his time to have two practice sessions each week.

The only problem is that he is South African of Indian descent. And NO ONE understands a word he says when he’s agitated. It’s actually pretty funny.

The Defenders are too far up and the opposition get through…

“Splutter mumble yell something something HENRY!!!!”

There is only one game left in the season. We do have one win under our belts. We’ve learned to score goals in the last few weeks. Just a bit late.

My boy has improved. He enjoys playing. I’m happy I don’t have to provide counseling after their losses any more.

And he’s outside running around.

From time to time I become aware of remarkable people doing remarkable things.

Or wanting to do remarkable things.

Oftentimes, all they need is a little financial support to help them achieve their goals.

Dylan Story is one of these. He’s 15. He’s got snowboarding talent to burn, so much so that he’s been invited to a 5-week elite training camp in Colorado.

He needs cash. He’s worked extraordinarily hard to pay his way, as well as developing a high-performance work ethic with regards to his training.

Here’s the link to his story and his pledgeme page. Can you help? We may just see him represent New Zealand at the next Winter Olympics.

I’ve been mulling the alleged late nights and drinking at inappropriate times of these high-level professional sportspeople over. Hence the delay in this post.

So there was media outrage over the behavior of these two. Perhaps a little judgey but then again, perhaps not.

My take on it is this.

I feel for the Black Caps. They’ve done something remarkable in achieving a test victory over India. And all the talk is about Ryder and Bracewell.

Both have been given multiple chances. Both are actually surplus to requirements now. We have depth.

Cut them loose NZ Cricket. As an organisation you’re moving forward and this Black Caps unit is gelling well, and performing.

The other players don’t need this distraction.

I’ve been thinking about the America’s Cup and redemption.

Us Kiwis have long memories when we feel hard done by. The underarm incident. Dirty Dennis. You know what I’m talking about.

After this regatta, what of Coutts and Butterworth?

They’ve been held up as sell-outs. They still have interests/homes in New Zealand (I believe) and will someday want to return here.
But how will they avoid the daily scrutiny and angst that is still directed at them from afar?

My take is this:

Team New Zealand wins the America’s Cup from Team USA. (It hinges on this occurring).

Coutts and Butterworth et. al then are in a position to be able to take the moral high ground. “We worked on the inside to get the America’s Cup through a natural growth period of Billionaires and Bragging Rights. The America’s Cup will now have a chance to be Country Vs Country and accessible to all”.

It may be that history will remember them as sporting heroes, restoring the oldest trophy in the world to its rightful place.